Roger Arthur on “The Secession Crisis” 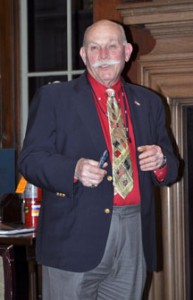 “The Secession Crisis” traced the events that led to the attempt to break up the Union. Why did the Southern states believe they were better off out of the Union? What justification did they have? What did the government do or attempt to do to assuage the sectional crisis? What caused the final rift? Why would they fire on the flag?