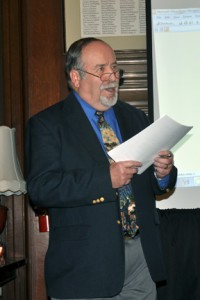 William Hughes, a member of Old Baldy, spoke on the history of the U.S. General Hospital at Beverly, New Jersey, during the war. The hospital, which was located at the site of a former civil war rendezvous camp, was in operation 1864-1865. Through much research, Hughes put together an interesting description of what it took to organize and operate this type of military hospital. His book traces the hospital’s roots and the people who shaped it including: the dedicated surgeons and nurses, the brave yet gravely injured and sick soldiers, the employees who took advantage, and the community that rallied around both staff and patients. It also touches on the origins of the Beverly National Cemetery, which holds over 40,000 military burials beginning during the Civil War. We heard from actual soldiers’ letters written home from the hospital. Both the hospital and cemetery have connections to similar sites in the Philadelphia area. END_OF_DOCUMENT_TOKEN_TO_BE_REPLACED