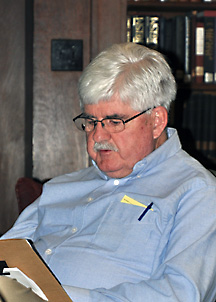 Mike Cavanaugh is a founding member of the Old Baldy Civil War Round Table, serving over the years as treasurer, program chairman, and twice president. His interest in the Civil War began in the early 1970s, when he found he had several ancestors in the war. Mike’s great grandfather, on his father’s side, Pvt. Thomas Holleran, was a member of the 96th PVI (raised in Schuylkill County) and on his mother’s side, Cpl. James Lindsey of the 1st New York Mounted Rifles (raised in New York City). Mike has authored and coauthored five books on the war and also founded the Civil War Book Exchange (now Civil War News). For more than thirty-five years, he has had an avid interest in the Battle of the Crater fought on July 30, 1864, in Petersburg, VA. This led to a book in 1989—coauthored with Bill Marvel—entitled The Horrid Pit, The Battle of the Crater. END_OF_DOCUMENT_TOKEN_TO_BE_REPLACED

The late Blake A. Magner was born and raised in the great commonwealth of Massachusetts. After a four year tour of duty in the U. S. Navy, which included time spent in the Brown Water Navy in South Vietnam, he moved to New Jersey after meeting his life mate at a USO dance in 1971. Blake and his wife have now been married for thirty-six years and are proud parents and grandparents. Blake has a Master’s Degree from Rutgers University in Biology and worked through the 1980s as a chemist. Continually hearing the call of History, Blake left his Science profession and became an independent historian in 1990. His area of interest includes just about everything from the War of Jenkins’s Ear through the late 18th century, the 19th century and ending with the death of Theodore Roosevelt. He also has a working knowledge of the Normandy landings and the Vietnam War. His studies include military history (specifically the Civil War and Revolutionary War), literature, personalities, the Founding Fathers and politics. END_OF_DOCUMENT_TOKEN_TO_BE_REPLACED

Jane Peters Estes on “A Christmas Past” 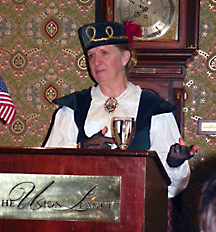 Jane Peters Estes has been a living historian and active member of various Delaware Valley region historical organizations for almost 30 years. She shared some of her expertise with members of OBCWRT on December 8th when she presented “Christmas Past,” a delightful overview of the origins of many of our Christmas traditions, ranging from the hanging of stockings to trimming the tree. Jane’s presentation particularly highlighted Christmas customs of the Civil War era and offered many insights, some of them surprising. The program was an early yuletide gift to all who attended. END_OF_DOCUMENT_TOKEN_TO_BE_REPLACED