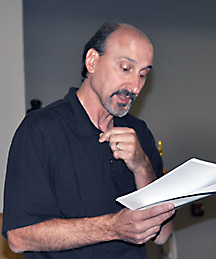 J. D. discussed how he became interested in the Civil War and the Battle of Gettysburg. How his collection of documents and books led to him becoming an accomplished author of many books and articles on Gettysburg. His latest book, The New Gettysburg Campaign Handbook, takes you from early June to the end of July. His friend Steven Stanley did the layout and all the maps. The book is part of a series of Civil War books published by Savas Beatie. J. D.’s new project is working on a television miniseries to be aired in 2013. J. D. gave us an interesting and educational presentation. END_OF_DOCUMENT_TOKEN_TO_BE_REPLACED