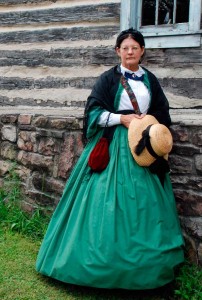 Arlene Harris spoke in first-person format as Catherine (“Kate”) Reynolds, the sister that John F. Reynolds was closest to throughout his life. Presenting information based on Reynolds family letters, as well as military records, “Kate” started by reviewing “her brother’s” early life and education, particularly his experiences in the Mexican War. After explaining how what he learned and accomplished shaped the Code of Honor he would live and die by, she showed how truly dedicated and valuable to his country he was, and how General Reynolds contributed to the Union victory at Gettysburg. Her talk emphasized the last weeks of John Reynolds’s life, leading up to his tragic but heroic death on July 1, 1863. END_OF_DOCUMENT_TOKEN_TO_BE_REPLACED