Joe Wilson on “Civil War Artifacts: The Story Behind the Relics”

Old Baldy C.W.R.T. member Joe Wilson discussed some of his most interesting relics that have a solid history and are often identified to a soldier. An identified relic opens the door and sheds light on the path of the relic through its storied history. Included in the presentation will be the personal Bible of Joe’s great-great-grandfather, Corporal George Garman of the 36th PA Volunteers, which came into Joe’s possession by a series of strange coincidences after a visit to Greenwood Cemetery in Northeast Philadelphia. Glued to the back cover of the Bible, Joe found a photo of Corporal Garman taken upon his release from Andersonville Prison. This image lent a face to an ancestor he had been researching for many years.

Joe Wilson is an avid Civil War relic collector. A retired plumber, in addition to belonging to Old Baldy, he is a member of the General George Meade Society and the Civil War Trust. He is currently working on a book entitled In Line of Battle: The Pennsylvania Reserves. 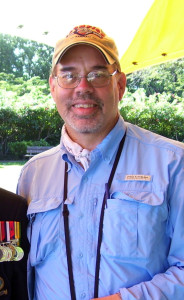