Gene Barr on “A Civil War Captain and His Lady: A True Story of Love, Courtship, and Combat”

More than 150 years ago, 27-year-old Irish immigrant Josiah Moore met 19-year-old Jennie Lindsay, a member of one of Peoria, Illinois’s most prominent families. The Civil War had just begun, Josiah was the captain of the 17th Illinois Infantry, and his war would be a long and bloody one. Their courtship and romance, which came to light in a rare and unpublished series of letters, forms the basis of Gene Barr’s memorable A Civil War Captain and His Lady: A True Story of Love, Courtship, and Combat. The story of Josiah, Jennie, the men of the 17th and their families tracks the toll on our nation during the war and allows us to explore the often difficult recovery after the last gun sounded in 1865.

Gene Barr is the president and CEO of the Pennsylvania Chamber of Business and Industry, the commonwealth’s largest broad based business advocacy group. Prior to his work at the Chamber, he spent almost twenty years in the energy field including more than twelve years with BP America, the U.S. subsidiary of British Petroleum, and seven years at the Pennsylvania office of the American Petroleum Institute including three years as executive director of that operation. He also served for ten years as a local elected official in the Philadelphia area.

Barr is a board member and past chair of the National Civil War Museum in Harrisburg, PA, among numerous other community and professional activities. A native of the Philadelphia area, Barr has had a longstanding interest in American history, particularly the Civil War period, sparked by his first visit to Gettysburg as a youth. He enhanced his knowledge while residing in Atlanta where he became familiar with the western theater of the conflict. He was active in living history for more than a quarter century and participated as an ‘extra’ in four films depicting the Civil War period, including “Glory” and “Gettysburg.” He has a bachelor’s degree in political science from St. Joseph’s University in Philadelphia. This is his first book.

David Farragut began his life as a sailor early; he commanded a prize ship captured in the War of 1812 when he was just twelve years old.

He was born July 5, 1801, and was commissioned Midshipman in the US Navy December 17, 1810, at age 9. By the time of the Civil War, Farragut had proven his ability repeatedly. Despite the fact that he was born and raised in the South, Farragut chose to side with the Union.

Farragut’s greatest fame came from the August 5, 1864, Battle of Mobile Bay. The Confederates had placed a large number of “torpedoes” in the waters. The monitor USS Tecumseh struck a torpedo and began to sink, causing the rest of the fleet to back away from the mine-infested waters. At the time, Farragut was watching the battle while lashed to the rigging of his flagship (USS Hartford). Alarmed, Farragut shouted, “What’s the trouble?” The USS Brooklyn answered, “Torpedoes!” Farragut shouted back, “Damn the torpedoes! Four Bells! Captain Drayton, go ahead! Jouett, full speed!” In the end, Farragut’s fleet defeated Confederate Admiral Franklin Buchanan and the last open seaport on the Gulf of Mexico fell to the Union. 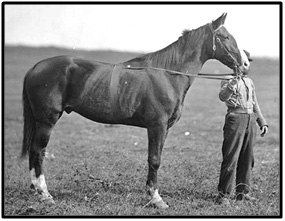