An estimated 200,000 men of German birth enlisted in the Union Army during the Civil War, far more than any other contemporary foreign-born population. One of these, Prussian Army officer Johann August Ernst von Willich, led a remarkable life of integrity, commitment to a cause, and interaction with leading lights of the nineteenth century. After resigning from the Prussian Army due to his republican beliefs, Willich led armed insurrections during the revolutions of 1848–49, with Friedrich Engels as his aide-de-camp. Ever committed to the goal of universal human rights, he once dueled a disciple of Karl Marx—whom he thought too conservative. Willich emigrated to the United States in 1853, eventually making his way to Cincinnati, where he served as editor of the daily labor newspaper the Cincinnati Republican.

With exhaustive research in both English and German language sources, author David T. Dixon chronicles the life of this ingenious military leader—a man who could also be stubborn, impulsive, and even foolhardy—risking his life unnecessarily in the face of overwhelming odds.

David Dixon earned his M.A. in history from the University of Massachusetts. His articles appear in numerous scholarly journals and magazines. David Dixon hosts “B-List History,” a website celebrating obscure characters and their amazing stories. www.davidtdixon.com.

By just about any standard Priscilla Gabosch has had a full and interesting life.

Born in the Midwest outside of Chicago, she also attended college in a rural area and subsequently has lived on both coasts. We are fortunate that her husband’s job led to a relocation to the Delaware Valley and that she likes the East Coast best.

Priscilla went to Blackburn College where she received her B.A. degree with a major in English and a minor in languages.

In addition to her formal education Priscilla has taken advantage of the Center for Learning and Responsibility—including several courses on the Civil War. She is currently engaged in an Opera Appreciation class as well.

After college, Priscilla went to work for the Pennsylvania Railroad and having aptitude for technology, she was chosen to participate in the company’s program for training in computer programming, which has put her in good stead for her further work in the insurance and banking areas. At retirement, she was working as a Business Systems Analyst in IT at a bank involved in Mutual Fund management.

Priscilla and her husband have been breeding and showing Rhodesian Ridgebacks since 1983. From this, she has become involved in the AKC as a licensed judge and has been involved with several dog clubs, serving in a number of positions, including Chairman of one, AKC delegate, Treasurer, Past President, Recording Secretary and Chief Steward.

Priscilla is also an avid reader with, as she puts it, eclectic tastes.

Her interest in the Civil War was sparked after taking several courses at CCLR about generalship and battles of the Civil War. She particularly enjoys strategy, not only of the Civil War, but other conflicts as well—she lists “Zulu” as one of her favorite movies and was impressed by how a small group of soldiers could hold off a large attacking force. The subject of slavery and the WWII genocide has also moved her to learn more about these topics. 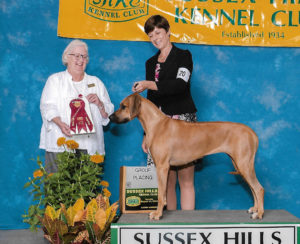 While she has many and varied interests and accomplishments, Priscilla feels particularly proud of her being chosen to judge the National Specialty of the Rhodesian Ridgeback Club of the United States in 2005—selected by her peers. She has also been awarded the AKC’s Good Sportsmanship Medallion not once, but twice. In addition, she has been Gloucester County Kennel Club’s Show Chairman for 20 years.

All in all, a very accomplished life that most of us can aspire to.