Craig Schoeller became interested in the Civil War at the time of the Centennial (1961-1965) when he read all of Bruce Catton’s books. In following years he visited most of the battlefields from Gettysburg, Antietam, Chickamauga, and to Atlanta. Later he set foot at Shiloh, Vicksburg, and Post Hudson. With the passage of time he became less interested in battle details and more attracted to human interest and people’s actions and interactions. END_OF_DOCUMENT_TOKEN_TO_BE_REPLACED 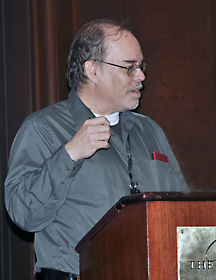 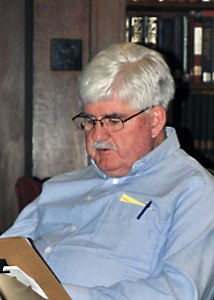 Noted as being one of the most one-sided battles of the Civil War, the battle of Fredericksburg is also remarkable in that Union casualties were more than twice those suffered by the Confederates and the armies at Fredericksburg represented the largest number of armed men ever to confront each other for combat during the war. END_OF_DOCUMENT_TOKEN_TO_BE_REPLACED

Dr. Sidney Copel is a clinical psychologist who is now retired. He received his undergraduate and graduate training at Temple University. He was for many years the Administrator of the Psychological Clinic at the Devereux Foundation where he ran one of the biggest programs of its kind in the country. After leaving Devereux he went into private practice until his retirement in 1995. END_OF_DOCUMENT_TOKEN_TO_BE_REPLACED 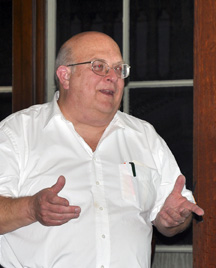 John’s presentation on gathering and transmitting military information during the Revolutionary War was very intriguing. The sophistication of codes designed for use to conceal information in letters is still being used today. They used alphabet matrices, cut out masks placed over written groups of words and words themselves that have different meanings. John showed us how sophisticated intelligence information was transmitted in colonial times. John is greatly welcome to come back even though his presentations are of another time period. END_OF_DOCUMENT_TOKEN_TO_BE_REPLACED 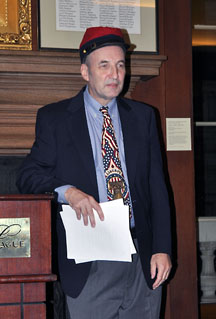 July 1, 1863, Emmitsburg, MD. – The higher the sun rose in the sky that morning, the more impatient Col. Ira Grover became with his regiment’s overdue relief. Finally, at 10 a.m., he ordered his 7th Indiana to move north to rejoin the main army. On the march, Grover heard that fighting had broken out at Gettysburg and quickened the pace. Arriving that evening, his men were posted to Culp’s Hill. END_OF_DOCUMENT_TOKEN_TO_BE_REPLACED 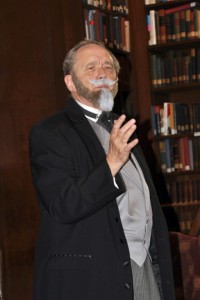 Late in his life, Hay was secretary of state under Roosevelt. Again, their relationship was more than professional. The two men had a lifelong friendship, which began when Roosevelt was 12. Roosevelt’s father (also named Theodore) had worked closely with Hay on Army-related matters during the Civil War. END_OF_DOCUMENT_TOKEN_TO_BE_REPLACED 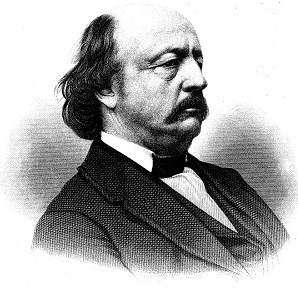 Ed Root’s program of General Benjamin Butler explored one of those historic characters who never fails to elicit strong opinion. He was both reviled as a criminal and scalawag and praised as a patriot in his own time. Today, he is most often one of the answers to questions about the Civil War’s most inept officers. Ed’s presentation was very fair and balanced (like Fox News!). Butler was not as bad as historians have made him out to be. There were the usual stories, some of which were quite humorous. Lots of new information. Ed is always welcomed back to Old Baldy. END_OF_DOCUMENT_TOKEN_TO_BE_REPLACED

Our own Herb Kaufman presented us with another of his excellent programs. “A People at War: American Jewry in the Civil War.” He gave us examples of how the War split Jewish families as it did other families in America—Brother fighting brother. How Jewish families in the South supported the Southern cause as did the Jewish families in the North supported to keep the Union together. He spoke on Jewish soldiers (7) winning the Medal of Honor for their bravery in the Union Army. The bravery of Jewish soldiers in the Confederate Army. That there were some Regiments that were made up of almost entirely Jewish soldiers because of the communities were they were organized. END_OF_DOCUMENT_TOKEN_TO_BE_REPLACED 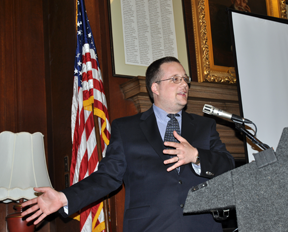