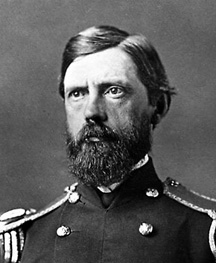 Arlene D. Harris spoke in the first person as Catherine F. Reynolds, the sister that John F. Reynolds was closest to through-out his life. Starting with his early life and education, this presentation showed how what Reynolds learned and accomplished shaped the Code of Honor he would live and die by and how truly dedicated and valuable to his country he was.

Arlene provided information on her background: Born in New Jersey of Pennsylvania parents, in 1953. I am a lifelong student of American History. After years of studying early and late Native American wars and then the American Revolution I decided to get into the American Civil War in the mid 1980’s. After finding I had more than a passing interest in John F. Reynolds, and why, I decided to center my studies and research on him. My found connection goes back to 1987. My husband Steve and I have been involved in Civil War living history as Henry and Kate Reynolds Landis since 2000. We belong to: Friends of Lancaster Cemetery, the General Meade Society of Philadelphia, the 98th Pennsylvania Volunteer History Organization, the Confederation of Union Generals based in Lancaster, Pennsylvania and the GAR Museum and Library of Philadelphia. We constantly do events in connection with these organizations. I gave three lectures on Major General Reynolds in 2010, two in 2011, and this will be the third year participating in Victorian Day for the Lancaster Cemetery, speaking at John Reynolds’ grave-site as Kate Reynolds as one of the stops on the cemetery tours all that day. To me I feel the most important thing we do is that we have complete adoption of the grave of John F. Reynolds and the entire Reynolds family plot which we landscape and care for year round. Being an art major, my John F. Reynolds connection has brought me back to my artwork and an oil portrait of him is in the works.