Harry Jenkins on “Forever in Our Hearts He Dwells: The Lives and Legends of Drummer Boys in the Civil War” 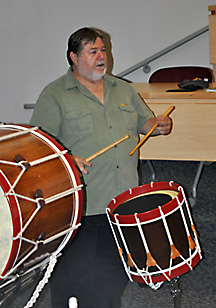 The Old Baldy Civil War Round Table of Philadelphia held its July 11th meeting at the Camden County College. Harry Jenkins prepared a great presentation on military drummers, “Forever In Our Hearts He Dwells,” about the lives and legends of drummer boys in the Civil War. Harry also included demonstrations of drumming techniques and the music played by Civil War musicians.

Harry discussed the reasons for drummers in the Civil War, the sounds and the techniques of drumming, and how orders were relayed to the troops by the officers during combat and camp life. He relayed several stories of drummers: how young some were, how brave these drummers were during combat, being right in the middle of the fighting. Some of the brave acts that were beyond their role as drummers. One interesting story of a drummer who risked his life to retrieve President Nixon’s wounded grandfather from the field of fire. He later received the Medal of Honor. Harry always gives us an interesting and educational presentation.

When Harry was eight, his dad took their family on a trip to Gettysburg. That trip was his introduction to the Civil War. Like many of us, he has been back to Gettysburg so many times since that he can’t count them all, and he knows his way around the town and the battlefield like he knows the back of his hand.

His life as a drummer and in Drum Corps started when he was ten. He joined a Scout Troop in Philadelphia that had drums & bugles, and they practiced at Scout meetings in preparation for the local Memorial Day and Independence Day parades and such. They also performed at summer camp for evening “dress parade” and “call to colors” before dinner. But that served to whet Harry’s appetite to get involved in the more elite Drum & Bugle Corps that he saw in parades, and that were champions in State and National Competitions. Over the years, he has been in the old Rising Sun VFW Post Cadets from the Lawncrest section of Philadelphia, often riding his bicycle to practice. The Philadelphia Police Athletic League started a drum corps in 1965, which Harry joined with some of his friends from Rising Sun. He and his friends were then inspired to join an up-and-coming group in Wilmington, Delaware. That group, the Blue Rock Drum & Bugle Corps, eventually became many-time State and National Champions. In his adult years, he marched and played with the Golden Knights Corps of Union, New Jersey, and later, with the great Yankee Rebels Corps from the Hamilton Post in Baltimore, Maryland. He also spent many years as a drum corps instructor, including a time at Scottsdale Community College in Arizona, and served as a judge in Drum & Bugle Corps and band competitions. He is a member of the internationally recognized “Company of Fifers & Drummers,” and is an active performing member of the “United States Association of Rudimental Drummers.”

Along with this, he continued to follow his Civil War interests, first as a drummer boy at the age of 14 during the Civil War Centennial celebrations in the early 1960’s. Having attended college near Phoenix, Arizona, and eventually moving there, he returned to the Philadelphia area in 1987. It was then that Harry decided to rejoin the ranks of Civil War reenacting, but this time as a soldier instead of a drummer boy. But he never lost his love for the drum, and continues to play even now in reenactments and parades.

Harry is a long-time member of the Old Baldy Civil War Round Table of Philadelphia, and a member and supporter of The Friends of Gettysburg Foundation, the Gettysburg Battlefield Preservation Association, and the Civil War Preservation Trust.

Born and raised in Philadelphia, Harry pursued his education in Architecture at Temple University and Arizona State University. He spent many years as a Project Manager, managing the planning, design and construction of many schools, medical facilities, and government facilities throughout eastern Pennsylvania, New Jersey, and New York. He now resides in Newark, Delaware, with wife Bobbie, and is very proud of son Clayton, a 2007 graduate of George Washington University, who is also a drummer.