Jane Peters Estes on “The Battle of Gettysburg: Where Were the Women?” 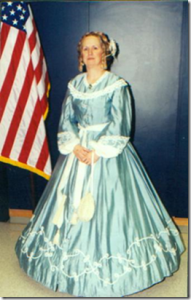 From the best known to the most obscure, this program discussed the many roles filled by women during the deadliest battle of the Civil War. With information gleaned from diaries, letters, and newspapers of the period, many parts of this program are told in the actual words of the women who lived through the battle.

Jane last shared some of her expertise with members of OBCWRT in 2011 when she presented “Christmas Past,” a delightful overview of the origins of many of our Christmas traditions. Her many programs and presentations include: Civil War Nurses, Fashions of the 1860s, Grave Matters (Victorian Mourning Customs), Wedding Customs and Traditions, Women’s Lifestyles of the 1860’s, Vivandieres, Pets of the Past, and The Battle of Gettysburg: Where Were the Women?