Rich Jankowski on “Renovations Needed for the Old Baldy CWRT” 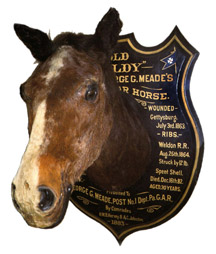 Our March meeting was to discuss the future of the Old Baldy Round Table. Fifteen folks showed up for the discussion. We had received 4 emails and 1 phone message from those unable to be there in person. Bill Hughes gave a brief account of the events in the last several months including the Board Meeting. The email and phone comments were shared with the audience. Herb Kaufman gave an account of our financial situation [which is good without dues collection]. Several members made their comments about their time with the Round Table and the Pine Street Museum. Discussion included Center City, the Union League, the aging of the membership, the need to publicize, and possible alternatives.

In the past it had been proposed to find another location as a possible solution to draw more folks. Since more than half of our regular attendees at the meetings are coming from New Jersey, Bill Hughes pursued some locations to possibly hold a meeting there. He made contact with Jack Pesda at the Center for Civic Leadership and Responsibility at Camden County College. Pesda agreed to host a meeting if we continued the Round Table, to see if there was interest on the New Jersey side. Other members from New Jersey pledged to assist Bill in getting the word out about the meeting. Just like folks reluctant on coming to Center City there is a fear of crossing the bridge, although it is very convenient. At this meeting after explaining the history of the Old Baldy Round Table, current members could testify to the ease of taking the Speed Line into the City and getting to the Union League. This effort would be to reach people not currently in a Philadelphia group [Meade, GAR, Laurel Hill, Union League, etc]. Other members are invited to seek alternate locations that could draw new members. Additional suggestions were to not meet over the summer, try more round table discussions and contacting local residents.

After everyone had the opportunity to comment, it was decided to hold the April meeting at the Union League, try the May 10th meeting at the College in New Jersey and collect dues for this year—please submit them to Herb. It is hoped that these actions will generate interest in our group because something different, outside the normal actions, needs to be done to grow our Round Table. Thank you to all who provided their input on this very important issue because it is your Round Table.