Craig Schoeller on “Battle of the Bulge—Imprisonment” 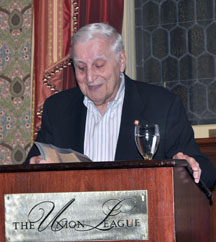 Due to an emergency cancellation by the scheduled speaker, Tom Moran, this month Craig Schoeller, OBCWRT member, presented the rest of his story on surviving the “Battle of the Bulge” during World War II. Craig’s story had previously gone from his enlistment to a replacement in the 35th Division of the Third Army in the area of Bastogne, Belgium, when the German Army made its final push to break through the American Lines. The second part of his story was about his capture and imprisonment in a German Stalag.