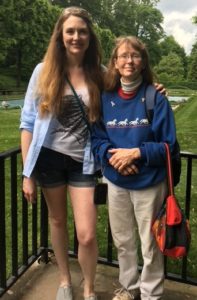 A visit to the Civil War Museum of Philadelphia on Pine Street in the early 1990s and viewing the preserved bust of Old Baldy by a self-described horse and history nut influenced Nancy Bowker to join the OBCWRT to learn more about Old Baldy.

Growing up in Riverton, NJ, Nancy’s artist father took her and her brother and sister to many museums to do research for his paintings of soldiers of the American Revolution. Nancy’s mother was a librarian and it must have had an influence on her literary skills as Nancy is the author of two horse related books and is co-author of a third. She has also had articles published in several trade horse magazines. Nancy’s education includes Palmyra High School, college in Vermont and Burlington County, NJ, a year at The Sterling School in Craftbury Commons, Vermont and a year in Horsemanship School in Chester Springs, PA.

It was research for her second book about horse trainer John S. Rarey that peaked her interest in the Civil War. Rarey was a world famous “horse whisperer” and was an important figure in the rehabilitation of abused and vicious horses during the 1850s. Nancy’s research on Mr. Rarey showed he was present as an observer in Thaddeus Lowe’s balloon during the Battle of Fredericksburg in 1862, even drawing Confederate fire. In order to gain more information on Mr. Rarey Nancy did more research on the battle and as she puts it, “became hooked.”

Nancy lives on a New Jersey farm with her husband Russ, two rescue horses that are smart, funny and noble;m and old mellow Golden Retriever and two cats. Her daughter Jessica is a social worker who also has a horse and is an ardent animal lover. Her background besides writing about horses includes working in horse stables, working at racing stables, a horse and carriage wedding service and volunteering with a therapeutic riding program. She currently works as a book seller at Barnes & Noble.

Overall Nancy is very interested in the cavalry aspects of the war. She enjoys studying the use of horses and mules, she also has interest in the generals Meade, Grant, and Sheridan. She has worked on a children’s book on Meade’s Old Baldy and is working to get it published.

She has traveled to various Civil War sites. It is not surprising that Nancy has visited Brandy Station, along with The Wilderness, Fredricksburg, City Point, Richmond, and Gettysburg. Besides the actual battlefields, she has enjoyed visiting the GAR Museum, The Smith Memorial in Fairmount Park and the stature of General Meade and Old Baldy behind Centennial Hall.

She has read many books on the Civil War. Favorites include The Passing of the Armies by Joshua Lawrence Chamberlain, the three book series on the Union Cavalry by Stephen Z. Starr, and books by Bruce Catton, Eric Wittenberg, Ed Longacre, and our own Dr. Andy Waskie. Her favorite Civil War movies are Gettysburg and The Colt. Other favorite movies are The Black Stallion, Field of Dreams, The Patriot, and Funny Farm.

Besides OBCWRT Nancy is a member of The General Meade Society and the Civil War Trust. She is a member of the following; The Author’s Guild, Society of Children Book Writers and Illustrators, and the Hooved Animal Humane Society. Nancy loves music and enjoys attending concerts, the Philadelphia Art Museum, and the Metropolitan Art Museum in New York City. She enjoys going to plays and horse events with her daughter.