Bennett Carlton on “Have We Taken the Mountain? – The Civil War Battles of General Charles G. Harker”

Bennett Carlton is the author of Have We Taken the Mountain?: The Civil War Battles of General Charles G. Harker. The book chronicles the military exploits of a local New Jersey soldier, a West Point graduate, who rose in rank to brigadier general in the Army of the Cumberland before being mortally wounded at the Battle of Kennesaw Mountain. Prior to Sherman’s Atlanta Campaign, Harker fought in all the major battles in the western theater: Shiloh, Perryville, Stones River, Chickamauga, and Missionary Ridge. Harker was regarded as one of the rising young stars of the army, prompting General William T. Sherman to write, “Regret beyond measure,” the loss of General Harker. 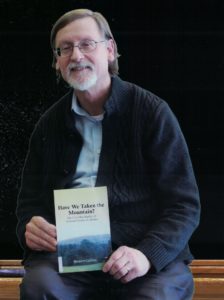 The author is senior library assistant at the Logan Township Public Library. He was formerly an editor and proofreader for a major pharmaceutical company, and is a former tour guide for Centipede Tours of Philadelphia. He is a long-time Civil War reenactor and is currently writing a second book, a history of the American Revolution in Swedesboro and Woolwich Twp., New Jersey, where he resides. 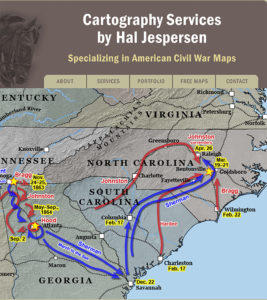 Readers say that one of the most important features of a modern book about the Civil War is a good collection of understandable, accurate maps. Hal’s presentation, offered via Skype from California, will reveal some of the details behind the process for creating such maps. Hal Jespersen’s cartography business has produced over 2,900 maps for Wikipedia and numerous books, magazines, and battlefield displays. Hal will discuss the state of mapmaking during the war, review the work of some famous cartographers, and describe tools and processes he uses to create maps. Some of the technical concepts included were projection, elevation rendering, evaluating the accuracy of the Official Records Atlas, and plotting the courses of 19th century rivers, roads, and railroads.

Hal Jespersen is a retired computer industry executive—formerly of Sun Microsystems—who has a strong interest in studying the Civil War. Hal was a U.S. Army Signal Corps officer in the 1970s, including Viet Nam, and then held a variety of computer software jobs in Silicon Valley until his retirement in 2010. Although he studied some military history and visited some battlefields as an ROTC cadet, Hal’s overriding interest in the war was triggered recently by a specific event—reading Michael Shaara’s The Killer Angels in 2003. That led to a period of voracious reading about the Battle of Gettysburg and to the first of a number of trips to that hallowed ground.

In 2004, Hal began to make significant contributions to the Civil War articles on Wikipedia, and is the principal author of about 130 battle and campaign articles as well as an equal number of biographical articles about Civil War generals. In addition to the text of the articles, Hal has produced over 2,900 Civil War battle maps, which are appearing in a number of online sites and numerous books. Hal focuses his interests primarily east of the Mississippi, and although he loves the Army of the Potomac, believes that the war was substantially won in the Western Theater.

Hal’s mapping website, www.CWMaps.com, includes about 200 freely available maps of the war, as well as information about his custom cartography business. His personal website, www.posix.com/CW/, contains links to his important Wikipedia articles and a large number of travelogue articles, recording his visits to Civil War battlefields and seminars over the years. Hal is the webmaster for three Civil War Round Tables, including Old Baldy.