SAVE THE DATE. Mark Saturday, May 14, 2022, with a bold red circle as we are going to celebrate not only Old Baldy’s 170th birthday but also the 45th Anniversary of our Round Table. Join us in celebrating these two extraordinary events. Round Table members, family and friends are all invited over to hosts Paul and Susan Prentiss’s home located in Marlton, NJ.

We will be out in the back yard, sitting in lawn chairs to maintain social distancing. The dining fare will be similar to last year but with improvements. We will have hamburgers, hot dogs, salads, sheet cake, chips, cheese & crackers plate, and whatever you want to bring.

The initial Picnic Planning email will be sent in early April. Send your ideas to Paul at

to make this momentous event a smashing success. 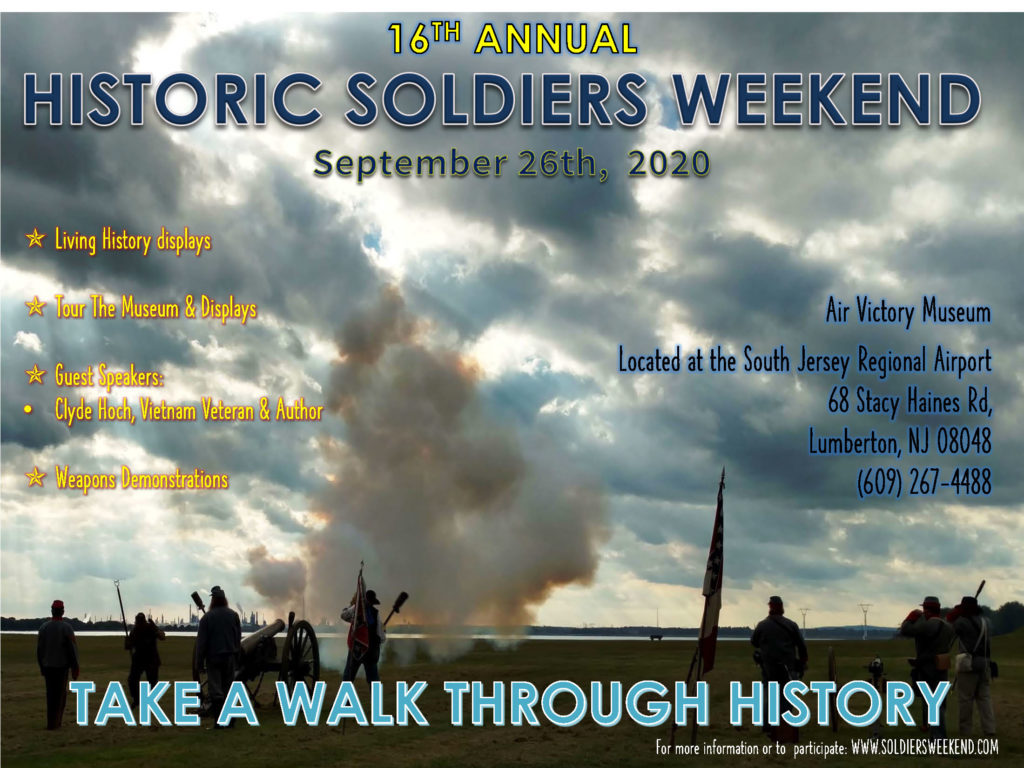 A message from John C. Fazio:

This year, as with the last two, I will again be teaching an overview of the Civil War at Chautauqua Institution in Chautauqua, New York (Causes, Combat, Conclusions and Consequences). The course number is 1420, a description of which you can access on-line by Googling “Chautauqua Institution”, then “2018 Season”, then “Take a Class”, then “Register for Classes”, then “Go to Course Number 1420”. The course consists of three two-hour lectures, complete with hundreds of PowerPoint slides, from 1:00 through 3:00 pm, on August 20, 21 and 22, at the Turner Conference Center. Tuition is quite modest–$85 for the entire course, with a daily rate if one wishes to attend only one or two of the lectures.

Incidentally, it happens, quite by chance and quite fortuitously, that Ken Burns will be speaking on two of the days that I will be lecturing. His program is titled “The Filmmaker as Collaborator: A Conversation With Ken Burns and Friends. His “Friends” are Dayton Duncan, a documentary filmmaker and author, and Geoffrey C. Ward, a scriptwriter and author. Burns’s program will be given on August 20 and 21 at 10:45 am, so one could easily schedule both his program and the Civil War lectures on both days. Burns hardly needs an introduction. He is the creator of numerous made-for-TV historical masterpieces, one of which, of course, is “The Civil War”, which George Will said was the best thing ever to be shown on television.

You can register at three different places on the grounds or, in advance, by using this address: http://chq.org/classes, which will take you to the registration information.

I hope to see some of you there. If you do come, please identify yourself to me.

If you have any questions, you can contact me by email (

Bob is presenting for our Community Outreach initiative: 10:30 am, July 2, 2018, at the Katz JCC Community Center, Cherry Hill, NJ. The JCC charges a $5 donation to cover refreshments.

To stand at Arlington National Cemetery today it’s easy to look at the rows of tombstones, set in perfect alignment, and view the rolling hills as a Garden of Stone. What you see today involves years of evolution that started long before the Civil War. In fact the narrative of the ground at Arlington goes back to the time of the American Revolution when George Washington’s adopted son purchased the ground where the National Cemetery sits today. Year’s later Robert E. Lee resided here. The guards at today’s Tomb of the Unknowns tie directly to George Washington and his Continental Army. That connection can be seen at Valley Forge National Historical Park. These associations to the past convey an interesting story that spans over 235 years.

Many stones symbolize the story of an American hero, someone who served our Nation either in the military or some other capacity. Beyond the graves are numerous monuments that tell a tale of American courage, some from America’s most heart wrenching and iconic moments. Three of the Marines who raised the flag at Iwo Jima are buried here, President Kennedy, his brothers, two Apollo 1 astronauts, Joe Louis, Audie Murphy and many other well known Americans. Memorials to the Shuttle Challenger Astronauts, the Confederate Monument, the Memorial Amphitheatre, the Nurses Memorial, war memorials and the great dignity of the Tomb of the Unknowns, along with others, will be discussed in this presentation.

This edgy documentary covers one of the saddest and least covered chapters of the war. Check out the review by the Philadelphia Inquirer and the link to the film. 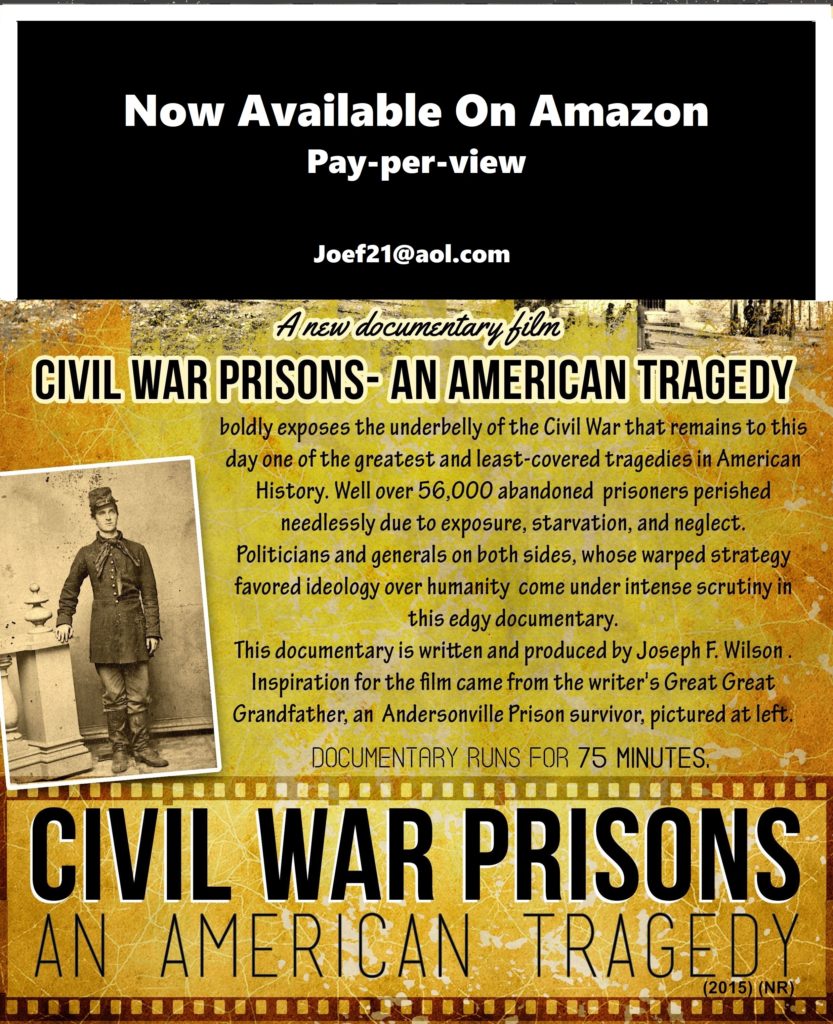 The Confederate prison at Andersonville killed more Union prisoners (13,000) than any battle.
The horrific conditions of the prison and the controversial trial of Captain Henry Wirz will be reviewed in detail. Revenge and the wrath of the North targeted Wirz for the enormous loss of life from starvation, exposure, and disease. 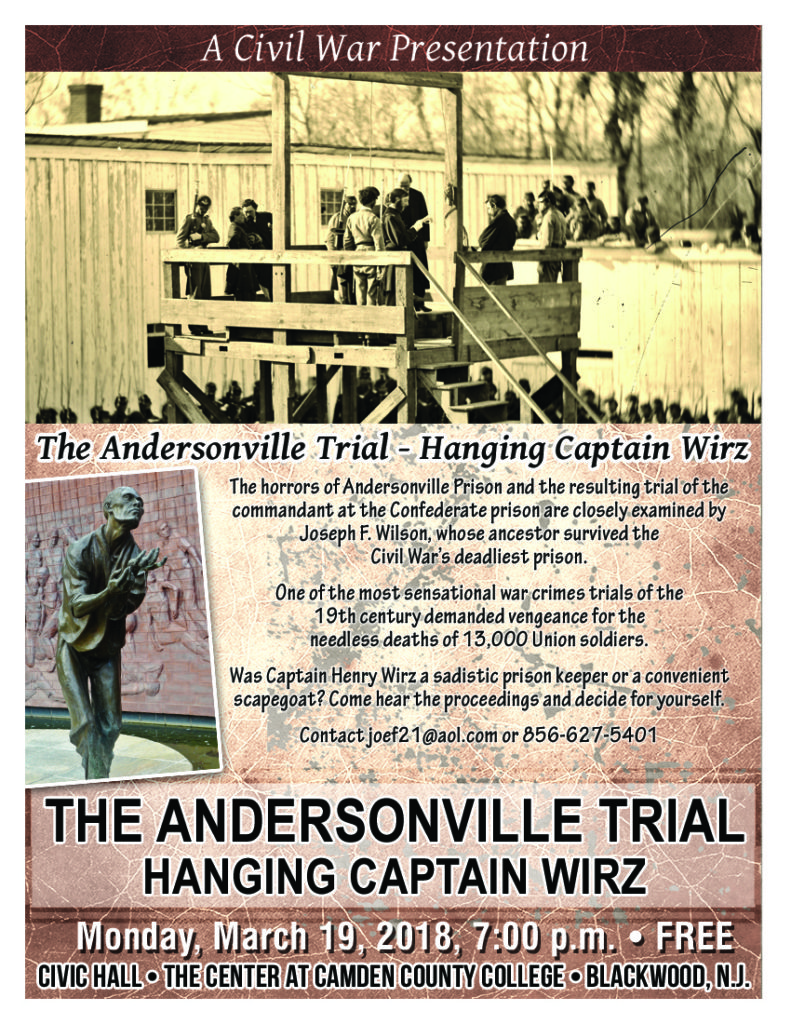