Carol Neumann-Waskie on “An Evening with Clara Barton” 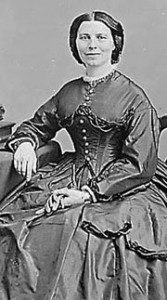 For many years Carol Neumann-Waskie has portrayed Clara Barton in a first-person style, “Living History” performance. An expert on the life of this brave and fearless woman, Carol shared her knowledge as “Clara Barton” at the March 13th meeting of the Old Baldy Civil War Round Table.

Born and raised in Philadelphia, Carol graduated with a BA in English Literature and Elementary Education from New York University. She continued studies in Counseling at Rutgers University and later pursued an advanced degree in Nursing from Gwynedd Mercy College. Since 1986 she has worked in the Temple University Health System in various roles. Currently, Carol is a nurse administrator for the Physical Medicine Department.

From 1994 until 2002 she was on the Board of Directors for the Friends of Laurel Hill Cemetery and has represented the group on NPR radio show.

In 1996 she became the co-owner and treasurer of History and Mystery Tours of Philadelphia, beginning the first Ghost tours, “Spirits of Philadelphia” After extensive research she found over 50 ghost sightings in the city, including her own dwelling. The business was featured on the Travel Channel.

Presently, Carol is researching a book on noted women of the 19th Century.